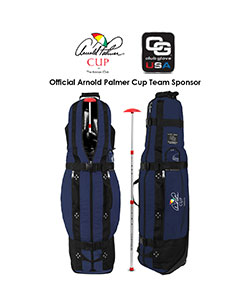 HUNTINGTON BEACH, CA (May 8, 2019) – The Arnold Palmer Cup has selected Club Glove to be the official travel bag sponsor for both the American and International teams. Club Glove will provide each player and coach with a custom, one-of-a-kind golf travel bag for their travel to this year’s event.

The iconic golf event will take place at The Alotian Club in Roland, Arkansas, June 7-9, 2019. Teams traveling to the event with the number one golf travel bag in collegiate golf will be taking part in the annual Ryder Cup-style competition.

“It has become a tradition for us to be part of this great event,” says Jeff Herold President and CEO. “To be a part of an event with the namesake of Arnold Palmer is truly an honor. The number of star players and major winners that have their names enshrined in the history of this event is amazing.”

The Arnold Palmer Cup was co-founded by Arnold Palmer and The Golf Coaches Association of America (GCAA) and began at the Bay Hill Club & Lodge, Orlando, Fla. in 1997. The event is a Ryder Cup-style tournament featuring the top men’s and women’s university/college golfers matching the United States against a team of International players. The Arnold Palmer Cup has been played at some of the world’s greatest courses including The Old Course, The Royal County Down, Royal Portrush, Baltusrol, The Honors Course, and Cherry Hills. The 2018 matches at Evian Resort Golf Club became the only major tournament which features men and women playing side-by-side as partners.

Since its inception, over 100 former Arnold Palmer Cup alumni have gone on to earn cards on either the PGA Tour, European Tour or LPGA, 28 have represented Europe or the USA in the Ryder Cup or Presidents Cup, and more than 50 have claimed 230 victories on the PGA or European Tours. The United States leads the series 12-9-1.