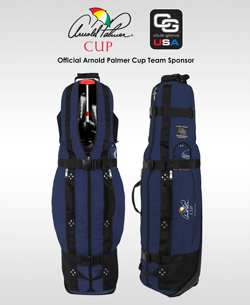 Club Glove was selected as the exclusive Golf Travel Bag provider for both the American and International teams. The players and coaches will all be traveling to and from this year’s event, at Evian Resort Golf Club in France, July 6-8, using college golf’s most popular golf travel bag, The Last Bag Collegiate by Club Glove.

“The Arnold Palmer Cup is thrilled to have its longtime partner Club Glove as an Official Team Sponsor again this year. The best collegiate golfers from across the country and around the world will once again protect their clubs with the # 1 Travel Bag in the industry as they journey to Evian, France this summer. Club Glove and their President, Jeffrey Herold, have been with us every step of the way.  Simply put, the best for the best,” said Golf Coaches Association of America CEO Gregg Grost.

One of the most iconic tournaments in the history of golf, the Arnold Palmer Cup, this year is celebrating its 21st anniversary.  Until 2003 the tournament was originally played between the world’s top ranked collegiate players from the U.S., Great Britain, and Ireland. To date, the prestigious event is now open to American and International teams. Many of the players that participate in the Arnold Palmer Cup move on to play on professional tours such as the PGA Tour, Web.com Tour, Champions Tour, and the European Tour. Also, for the first time, this year’s tournament will be introducing women’s teams.

“It is a tremendous honor to be part of such a wonderful event. The tradition that the Arnold Palmer cup has established over the years has brought it to the forefront as one of golf's elite events for young players. Like everyone, all us folks here at Club Glove are excited about the new co-ed format that will add even more excitement to the matches,” says Club Glove President Jeff Herold.

Club Glove continues to be the leader in premium travel luggage, club covers, towels, and accessories. The Last Bag® was named one of the sport’s top 10 innovations of the last 20 years by Golf Digest. The TRS Ballistic brand by Club Glove is now the number one luggage on the PGA Tour.