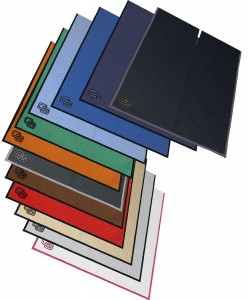 Club Glove’s Caddy Towel – A Winner
by Susan Bairley
It’s big and hungry.  And if you’ve never heard that description used for a golf towel, welcome to the world of Club Glove USA’s microfiber Caddy Towel.

I have the classic ‘white’ model.   Sporting a handsome waffle fabric design, edged with black stitching and monogrammed with the CG logo, it’s almost too classy to get dirty.  The towel measures 40-by-17 inches and has a 7 ½-inch finished slit in the middle, so it can drape over any club in your bag.

Like most microfiber fabrics, it has a soft sticky feel to it – eager to grab dirt and debris off your clubs, sunblock of your hands, or as the company says, “gentle enough to safely clean eyeglasses.”

The towel was ordered for use by the 2012 U.S. Ryder Cup team and was used by the winner of the 2013 Commercial Bank Qatar Masters earlier this year.

Featuring more than 5 million yards of microfiber strands, each towel is said to be able to hold 300 percent of its weight in water, which also makes it a good spur-of-moment bag cover on drizzly mornings or to guard against quick downpours.

Lightweight, super-absorbent and virtually lint-free, it does a nice job on sunglasses, computer screens and yes, golf clubs.

Adding the towel to Club Glove’s already successful product line was a logical next step, said company founder Jeff Herold.  “Like everything at Club Glove, we had to make something that was truly different and better than anything else on the market,” he said. “We contacted one of the larger microfiber suppliers in the nation and they sent a huge collection of material samples. Several could have been used for golf, but what caught our attention was the waffle pattern, which was reminiscent of bathrobes at luxury resorts and had the perfect texture for cleaning clubs by really getting into the grooves.

“The size was also important to us, as we wanted something that would be perfect for either a caddy or player to use. It had to be slender and not too large, so we settled on a perfect size of 17 by 40 inches,” he added.

Herold, an avid golfer, surfer, pilot and heli-skier, said the center-slit design of Club Glove’s Caddy Towel was based on his own course experiences.  “The towels I had always used were the large type that you would weave between clubs or drape over the club heads, however, I found that very often my towel would come loose and fall off. Inevitably, I’d be about 100 yards down the fairway by the time I realized this and would have to run back and retrieve it,” he said.

“When we designed our towel, we made sure there was an easy way to keep the towel secure, but to also allow quick access when needed. The solution was to add the slit.”

The pro-sized Caddy Towel ($19.95), comes with an 8-by-12-inch pocket towel, as a gift with purchase.  A customizable 16-by-24-inch cart towel, also is available for corporate sales.