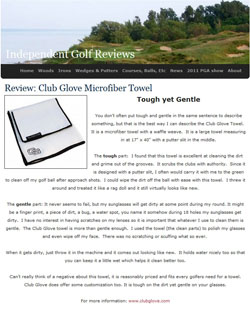 You don’t often put tough and gentle in the same sentence to describe something, but that is the best way I can describe the Club Glove Towel.  It is a microfiber towel with a waffle weave.  It is a large towel measuring in at 17 x 40 with a putter slit in the middle.

The tough part:  I found that this towel is excellent at cleaning the dirt and grime out of the grooves.  It scrubs the clubs with authority.  Since it is designed with a putter slit, I often would carry it with me to the green to clean off my golf ball after approach shots.  I could wipe the dirt off the ball with ease with this towel.  I threw it around and treated it like a rag doll and it still virtually looks like new.

The gentle part: It never seems to fail, but my sunglasses will get dirty at some point during my round. It might be a finger print, a piece of dirt, a bug, a water spot, you name it somehow during 18 holes my sunglasses get dirty.  I have no interest in having scratches on my lenses so it is important that whatever I use to clean them is gentle.  The Club Glove towel is more than gentle enough.  I used the towel (the clean parts) to polish my glasses and even wipe off my face.  There was no scratching or scuffing what so ever.

When it gets dirty, just throw it in the machine and it comes out looking like new.  It holds water nicely too so that you can keep it a little wet which helps it clean better too.

Can’t really think of a negative about this towel, it is reasonably priced and fits every golfers need for a towel. Club Glove does offer some customization too. It is tough on the dirt yet gentle on your glasses.