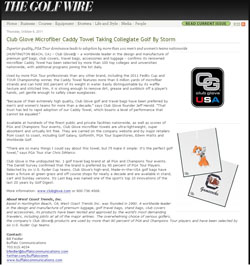 Used by more PGA Tour professionals than any other brand, including the 2011 FedEx Cup and TOUR Championship winner, the Caddy Towel features more than 5 million yards of microfiber strands and can hold 300 percent of its weight in water. Easily distinguishable by its waffle texture and stitched trim, it is strong enough to remove dirt, grease and sunblock off a player's hands, yet gentle enough to safely clean eyeglasses.

Because of their extremely high quality, Club Glove golf and travel bags have been preferred by men's and women's teams for more than a decade, says Club Glove founder Jeff Herold. That trust has led to rapid adoption of our Caddy Towel, which boasts a level of performance that cannot be equaled.

Available at hundreds of the finest public and private facilities nationwide, as well as scores of PGA and Champions Tour events, Club Glove microfiber towels are ultra-lightweight, super absorbent and virtually lint free. They are carried on the company website and by major retailers from coast to coast, including Golf Galaxy, Golfsmith, PGA Tour Superstores, Edwin Watts and Worldwide Golf.

There are so many things I could say about this towel, but I'll make it simple: It's the perfect golf towel, says PGA Tour star Chris DiMarco.

Club Glove is the undisputed No. 1 golf travel bag brand at all PGA and Champions Tour events. The Darrell Survey confirmed that the brand is preferred by 90 percent of PGA Tour Players. Selected by six U.S. Ryder Cup teams, Club Glove's high-end, Made-in-the-USA golf bags have been a fixture at green grass and off course shops for nearly a decade and are available in stand, cart and Sunday versions. Its Last Bag was named one of the sport's top 10 innovations of the last 20 years by Golf Digest.