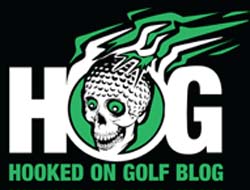 
For my 2nd golf towel review in the past week (I’m on fire), I’m featuring the Club Glove Microfiber golf towel. I’ve got this towel in play right now and have for about 15-20 rounds, including my recent rounds in Scotland.

Technology
The Club Glove Microfiber towel is a pro-tour size towel at 17×40 inches. As the name implies, the fabric of this towel is much more dense than a standard towel which allows it to hold 300% of its weight in water. The fabric is also lint free.

With the micro fibers, the towel is soft enough to use on glasses, or delicate surfaces which you don’t want to scratch. I’m a bit paranoid of doing my glasses though, as I use the towel to clean my clubs and certainly dirt can get on the towel which would scratch them.

The texture (left) of the towel is similar to that of a small waffle pattern. This helps absorption and gives a nice varied surface for cleaning clubs.

On The Course
The towel has an eight inch center slit for mounting on clubs in the golf bag. The slit is great for being able to remove the towel easily to take it to the green or away from the bag, while at the same time prevents the towel from falling off and getting lost. I usually slip three irons through the hole so that removing one club doesn’t result in the towel falling to the ground.

Options
The Club Glove Microfiber towel is available in nine colors. If you like the color of my towel in the photos, that one is the “gray” selection.

For an extra $10 over the $19.95 sticker price, Club Glove will personalize the towel. When someone rips off your towel you can identify it now because it has your name on it! Two options of small script print or larger block letters is available with four different thread colors. A third option provides letters or initials inside a diamond shape.

Pocket Towel
A matching greenside “pocket towel” is included as well, though unfortunately I didn’t get one with my unit. The pocket towel is 8×12 inches.

Conclusion
Great towel. I love the fact that it doesn’t attach with a hook or clasp to the bag, making it easy to mount to the bag and take it off.